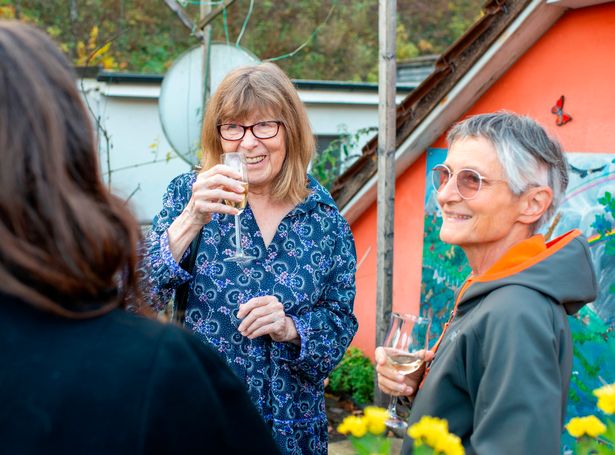 Crippled by illness, Dawn Voice-Cooper, 76, travelled to Switzerland to end her life at a clinic where she released a fatal dose of barbiturates into her bloodstream – she wanted the Mirror to be with her to tell her story

Surrounded by her friends, Dawn Voice-Cooper sips ­champagne, has a cigarette then listens to her ­favourite song one last time.

Just minutes later, she is dead. The mum-of-one had got her final wish for an assisted death at an organisation in ­Switzerland, where she released a fatal dose of ­barbiturates into her bloodstream.

Her tearful last words to the emotional pals and medical staff at her bedside were simply: “Thank you, thank you everyone.”

The sick 76-year-old had spent her last years fighting for the right to die, in the hope that one day the UK may enact assisted dying laws of its own.

Facing a daily battle with a litany of incurable health problems, including severe arthritis, repeated brain bleeds and epilepsy, Dawn was determined to end her life on her own terms before the quality of her life, which she described as “at times unbearable”, deteriorated further.

And she invited the Mirror to cover her journey to show people on all sides of the debate the realities of an assisted death.

But without suffering a terminal illness, her decision to die is hard for some to understand. Dawn said: “People often tell me, ‘Oh you look fine, you look young, you’ve got a bit of a limp.’

“But they don’t know what’s really going on inside me, the pain and the difficulties.

“The daily management of my ailments and my injuries.”

Her story comes as campaigners mark World Right to Die Day across the globe.

Assisting suicide is punishable by up to 14 years in prison in England, Wales and Northern Ireland. But prosecutors will decide whether it is in the public interest to take anyone to court.

For Dawn, who lived alone in Sevenoaks, Kent, with decreasing mobility, the law also pushed her to end her life earlier while she was still fit to travel.

he added: “Part of me wants to go on campaigning, but the rational part of me knows that this could lead to not even being able to travel. I am going before I want to, but this will never get better, it will get worse.”

Proposals for an assisted dying law brought by Baroness Meacher would only be available to those with less than six months to live. It last week passed its second reading in the Lords and progressed to the Committee stage for the first time in seven years.

But it still has several stages to clear. And Dawn believed this model is too restrictive and has instead called for an evidence-based Parliamentary inquiry into assisted dying.

It was her hope that the UK will build a model like Canada, where those with a grievous and irremediable condition can also apply for an assisted death.

Opponents of assisted dying fear any legalisation will push disabled and elderly people into ending their lives early out of fear of becoming a care burden.

But Dawn hoped by sharing her journey she can show that rigorous safeguards can be in place to stop abuse. She added: “I would like to dispel all the myths around assisted dying, that people could be coerced. That it’s against God. I would just like people to know it is a dignified choice. It gives people dignity. It gives people peace that they can do it and they have this offer. It gives you autonomy.

“And it enables people whose quality of life is low and can’t get better to take control of themselves and their lives.

“Why must people suffer? Why is it acceptable? We wouldn’t let our pets suffer or animals suffer.” The children’s writer, who lived in Penzance, Cornwall, before returning to Kent, first began considering an assisted death in 2017. She made her application to the Lifecircle clinic in Basel two years ago.

The application process required her to submit her medical history, explain her reasons for wanting an assisted death and to prove she was mentally competent.

And once in Switzerland she was assessed by two separate doctors before being taken to the clinic, where up to two people end their lives each week.

Unlike the better-known Dignitas, where patients drink a lethal cocktail of medication, Lifecircle sets an IV drip which recipients operate themselves.

Inside the clinic, in an industrial area which backs onto woodland outside the city, Dawn signed her own death ­certificate. She hugged her friends, fellow campaigners Alex Pandolfo and Miranda Tuckett, before a nurse ­positioned her bed in front of the window to look out at the trees.

She said: “It’s beautiful here surrounded by the trees. I think it must be the most beautiful place to die.”

The application process required her to submit her medical history, explain her reasons for wanting an assisted death and to prove she was mentally competent.

And once in Switzerland she was assessed by two separate doctors before being taken to the clinic, where up to two people end their lives each week.

Unlike the better-known Dignitas, where patients drink a lethal cocktail of medication, Lifecircle sets an IV drip which recipients operate themselves.

Inside the clinic, in an industrial area which backs onto woodland outside the city, Dawn signed her own death ­certificate. She hugged her friends, fellow campaigners Alex Pandolfo and Miranda Tuckett, before a nurse ­positioned her bed in front of the window to look out at the trees.

She said: “It’s beautiful here surrounded by the trees. I think it must be the most beautiful place to die.”

Q: What is your name?

Q: What is your date of birth?

Q: Can you tell me why you came here to Lifecircle?

A: I want an assisted death because the quality of my life is not good and it will get worse.

Q: We have set an intravenous needle. Dawn do you know what is going to happen if you open this profusion?

Dr Preisig then said: “If this is your last wish you can open the profusion.”

Listening to Nick Drake’s Day is Done, with her friends holding her hands, Dawn then released a valve on the IV.

Following a police report, which takes place after every assisted death at Lifecircle, her body will be cremated and her ashes scattered by Dr Preisig.

Alex, who has early onset ­Alzheimer’s and will also die at Lifecircle before he deteriorates, said: “It was one of the most beautiful and loving deaths I have witnessed in contrast to the unacceptable and prolonged tortured deaths of my beloved mum and dad and the death my Alzheimer’s may bring to me.

“Dawn’s story and experience of both pain and then peace through the support of Lifecircle will be used as I continue to ask for an evidenced based parliamentary inquiry into humane voluntary assisted dying in the UK.

“I live in peace knowing that when it’s my time to die comes I can rest in the arms of Dr Erika Preisig at the start of my journey into the unknown.”

Figures show up to one Brit a week travels to Switzerland to end their life – a journey which costs around £10,000 and can leave family members at risk of ­prosecution for helping a loved one.

Assisted dying is legal in a number of places across the world, including the Netherlands, Belgium, Switzerland, eleven US jurisdictions, Canada and parts of Australia.

New Zealand and Spain have passed legislation which is set to come into force this year.

Campaigners say it’s high time that Britain ends its blanket ban on assisted dying, but there is strong opposition, amid fears a new law could lead vulnerable people to feel pressure to end their lives.

Christian charity CARE fears that “giving assent to assisted suicide would undermine the caring ethic which underpins our medical profession”.

The group also believes there is a “huge risk” that changing the law would see patients who already face challenges in accessing good palliative care “reluctantly opting for an assisted death when they would have preferred to live”.

Following a debate in the Lords last week, Nola Leach, CEO of CARE, said: “We believe that giving assent to assisted suicide would undermine the caring ethic which underpins our medical profession and society at large.

“Introducing such a regime would integrate into our culture the belief that certain lives are no longer worth living, and would legitimise the involvement of doctors, society’s preservers of life, in the procurement of death.

“This debate is not just about personal freedom for the dying, who of course deserve our sympathy and concern; it is about giving medical practitioners the legal power to facilitate the ending of another person’s life and the societal implications of such a move.

“Whilst for some the bill may be perceived as granting choice, marginalised groups are concerned that it will lead to others seeing the option as a duty to end their lives.”

There is also a debate around who should qualify under any law change.

The House of Lords bill brought by chair of Dignity in Dying Baroness Meacher would be limited to mentally competent, terminally ill adults with six months to live.

However Dawn, who was a long term member of campaign group My Death, My Decision, believed this legislation is too restrictive.

MDMD chair Trevor Moore said: “Dawn’s story also highlights the critical need for politicians not to lock those with incurable suffering outside of efforts to change the law on assisted dying.

“As a longstanding member, campaigner, and friend of My Death, My Decision we are glad that Dawn has finally been able to find peace.

“But we urge lawmakers to ensure that she is the last case of someone forced to leave their home in the UK in order to do so. Now is the moment to change the law on assisted dying.”