Living With The Choice To Die: What We Can Learn From Paralympian’s Euthanasia Death 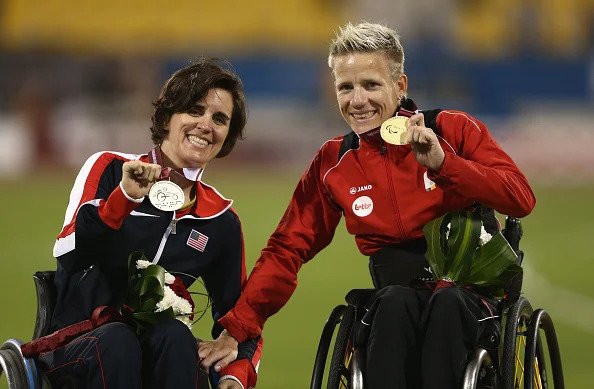 Vervoort of Belgium celebrates winning gold with Kerry Morgan of US in 2015. Image: Getty

Paralympian Marieke Vervoort has ended her life via euthanasia more than 10 years after she signed the paperwork seeking to die voluntarily.

The London 2012 gold medal-winning athlete’s journey is not uncommon.

The 40-year-old Belgian athlete had a long and painful battle with a degenerative muscle disease, yet experts say having the legal right to end her life seemed to help prolong it.

She was just 14 when diagnosed with an incurable spinal disease, yet Vervoort pursued a sporting life including playing wheelchair basketball, swimming and racing in triathlons.

Not only did Vervoort leave behind an illustrious sporting career — she won the 100m gold and 200m silver wheelchair races at the 2012 London Games, as well as the 400m silver and 100m bronze in Brazil four years later — she also amplified the debate about assisted dying around the world.

In Belgium, euthanasia is legal for people with a terminal illness or those living with unbearable pain.

This is mirrored in recent research which finds that only one in three people who have access to life-ending medication (that they can administer themselves) don’t end up actually taking it.

It’s considered to have a placebo palliative effect.

“Having control on when you die can actually reduce the number of people who end their lives and this is really important to highlight, particularly now in Australia”,  Associate Law Professor Andrew McGee from the Queensland University of Technology said.

At the Paralympic Games in 2016, Vervoot announced that she could no longer endure sleeping for only 10 minutes some nights, and described her pain as so severe that it caused others to pass out just watching her.

READ MORE: Why A Mother-Of-Two Is Fighting For The Right To Die

“I get more and more depressed. I never had these feelings before. I cry a lot. Now even my eyesight is disappearing.

Yet it was another two years before she took the final step.

“Knowing that she had that choice gave her courage to continue living,” Dying With Dignity New South Wales spokesperson Shayne Higson told 10 daily.

“The thing to take away from what has happened — obviously it is very sad for anybody to feel that they have reached a point in their life where they have to end their life — however this shows when somebody is living with unbearable suffering, once they know they have some sort of control it actually allows people to live longer,” she said.

This is backed by research from the U.S state of Oregon where assisted dying for terminally ill patients has been legal since 1997.

“Knowledge that escape from intolerable suffering is always available can diminish the felt need to hasten one’s death, and allowing physicians to discuss all options with their patients promotes a thorough consideration of all these options, including alternatives to hastened death such as hospice care,” a team of international health researchers wrote in a 2009 report.

Many opponents of euthanasia do so on religious grounds, usually based on the beliefs that life is given by God. If people become vulnerable through illness or disability they argue they deserve special care and protection, and proper end of life care rather than euthanasia.

Research published in the United States National Library of Medicine, details non-religious arguments in opposition of assisted dying. These include:

But Vervoort said she wanted to be remembered as “always laughing, always smiling.”

“I hope euthanasia is also something [to show] every country that it means – not murder – that it means giving a feeling of rest to people,” the late athlete said.

In June, nation-leading laws came into force in Victoria allowing people the right to end their lives if they are experiencing “intolerable suffering” associated with an “incurable, advanced and progressive” medical condition and have less than six months to live.

This is mainly by patients self-administrating the medication, according to McGee.

“I think this is really key if people are given the autonomy to take the drug or potion themselves, in their own time they are actually less likely to take it. But the power and control is in their hands,” he told 10 daily.

In September, voluntary assisted dying laws easily passed the WA Lower House, however, a vote in the Upper House is expected to be tighter and last longer.

Higson said an assisted dying bill will be debated in NSW parliament early next year.